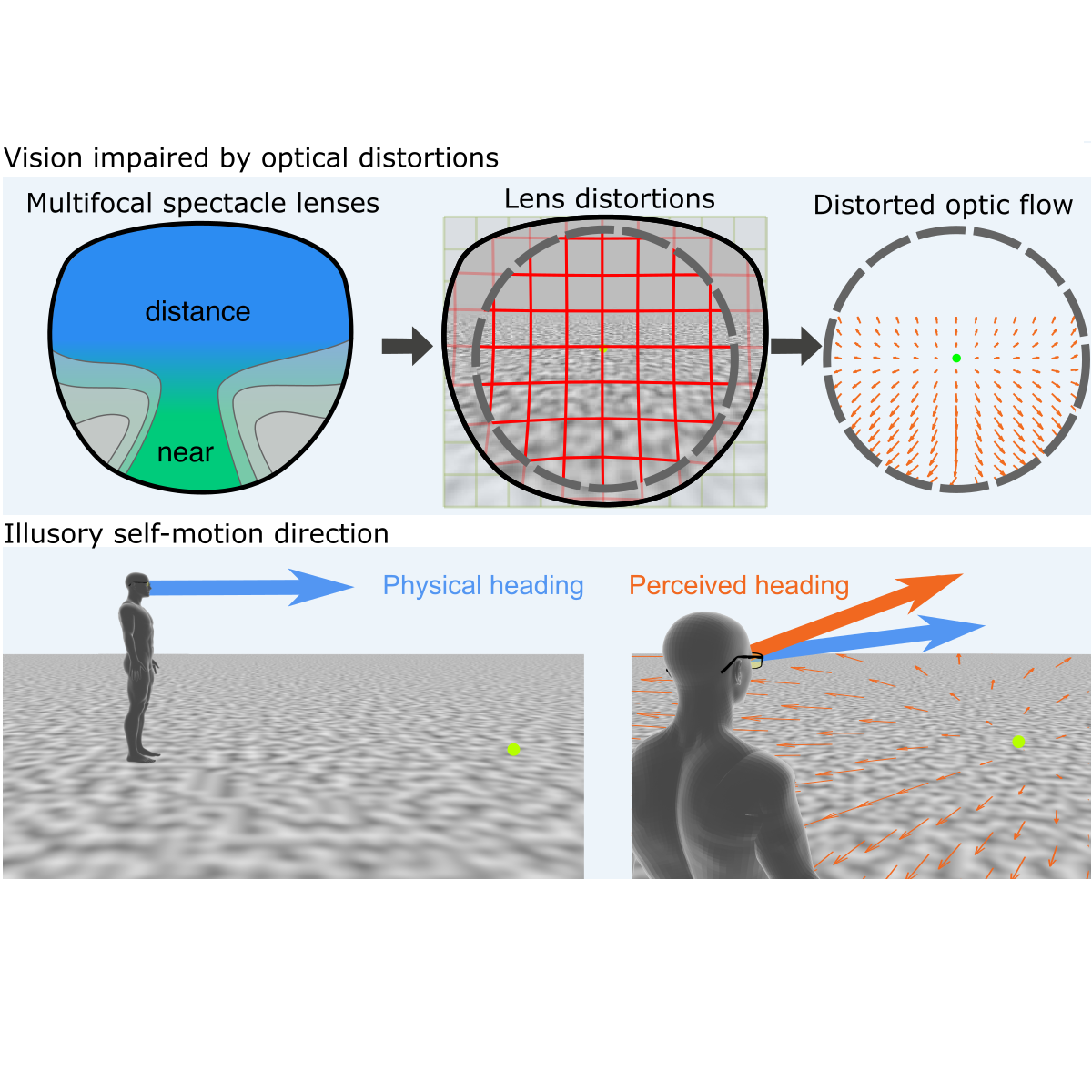 Progressive addition lenses (PALs) are ophthalmic lenses mainly used to correct presbyopia. They improve far and near vision in different areas of the lens. This inevitably creates local distortions of the spatial field of view. Novice wearers of PALs often report unnatural motion percepts during self-motion. To better understand these effects, we analyzed the impact of the distorted field of view in PALs on the estimation of heading in an established computational model of self-motion perception. We simulate distorted optic flow fields for a particular PAL design and a typical self-motion scenario, a straight walk over a flat plane while fixating a point on the ground. Analyzing these flow fields showed changes in heading estimation mainly along the vertical axis. A VR-based psychophysical experiment confirmed this prediction as participants perceived upwards deviations from the true heading when gaze crosses the peripheral lens areas.

Action and perception are crucial aspects of our everyday life. Based on the dual-visual stream theory, it is now accepted that action and perception are not separated processes, but they interact and influence each other. However, it is still unknown how perception may be affected by unpredictable changes in object size during grasping movements. In this study, we aimed to determine whether size perception and saccade amplitude before and after grasping movements were modified by horizontal size perturbations during movement execution and under the presence or absence of tactile feedback.

Two main discoveries were found. First, the horizontal size perception is modulated by the execution of grasping movements and, moreover, it relies on the presence of a horizontal size perturbation during the grasping action. Second, saccade responses exhibited amplitude modifications according to the types of target perturbations occurred in the previous action execution. These findings suggest that the combination of manual perceptual reports and corresponding saccade amplitudes are descriptive parameters of previous motor actions. 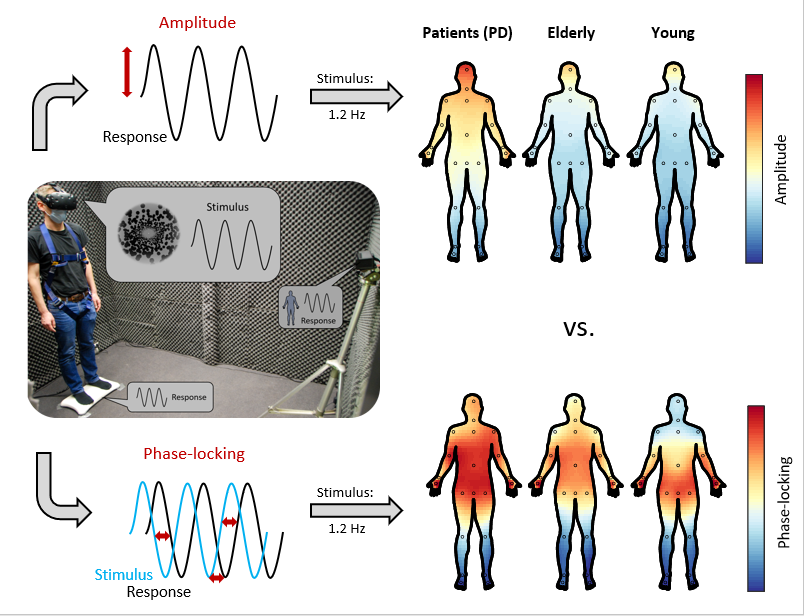 In a collaboration between UMR and MU, we established a mobile setup to investigate the impact of oscillatory optic flow on body sway and postural control. In this setup, participants stand on a force platform to track their centre of pressure while their body motion is recorded with a video-based motion tracking system. Visual stimuli are presented through a virtual reality head-mounted display.

The innovative combination of full-body motion tracking along with our phase-locking technique, which we adopted from EEG studies and were the first to apply in the context of body sway, allowed us to reveal a previously supposed shift in participants’ movement patterns as the frequency of the visual stimulation increased.

We developed MREyeTrack, a novel eye tracking method based on real-time Magnetic Resonance Imaging (MRI). This allowed many fast measurements of an entire cross-section of the eye, unlike most common eye tracking that measures only the front of the eyeball. This has the advantage of measuring eye movements even when the lid is closed, additional assessment of the ocular muscles and visualising displacements and deformations of the whole eyeball. Using this new method, we could for example show that the whole eyeball is being pulled back into the eye socket during a blink. We hope that MR-based eye tracking enables new opportunities for studying ocular motility and its disorders.

A number of virtual reality displays with integrated eye trackers have recently become commercially available. If their eye tracking latency is low and reliable enough for gaze-based rendering, this can open up many interesting opportunities for researchers. We measured eye tracking latency for the Fove-0, the Varjo VR-1, and the HTC Vive Pro Eye using simultaneous electrooculography measurements. We determined the time from the occurrence of an eye position change to its availability as data from the eye tracker (delay) and the time from an eye position change to the earliest possible change in screen content (latency). Our results show significant differences between the HMDs. Delays ranged from 15 ms to 52 ms, and latencies ranged from 45 ms to 81 ms. The Fove-0 seems to be the fastest device and is best suited for gaze-based rendering.

Adaptation to geometrically skewed moving images: An asymmetrical effect on the Double-Drift Illusion

We used the curveball illusion to better understand how motion is perceived under the effect of skew distortions in our peripheral visual field. This illusion is a drifting texture object that, while falling straight in the periphery, fools our perception into believing its trajectory is tilted in the drift direction.

After a short period of watching a skew distorted movie, we observed that motion and the illusory perception of motion get affected in a particular way. We prove that the tuned cells by skew distortions affect complex perceptual effects, like illusory perception. Progressive addition lenses that induce this kind of distortions in the periphery may change how we usually interact with the perceived motion and become a reason for discomfort. 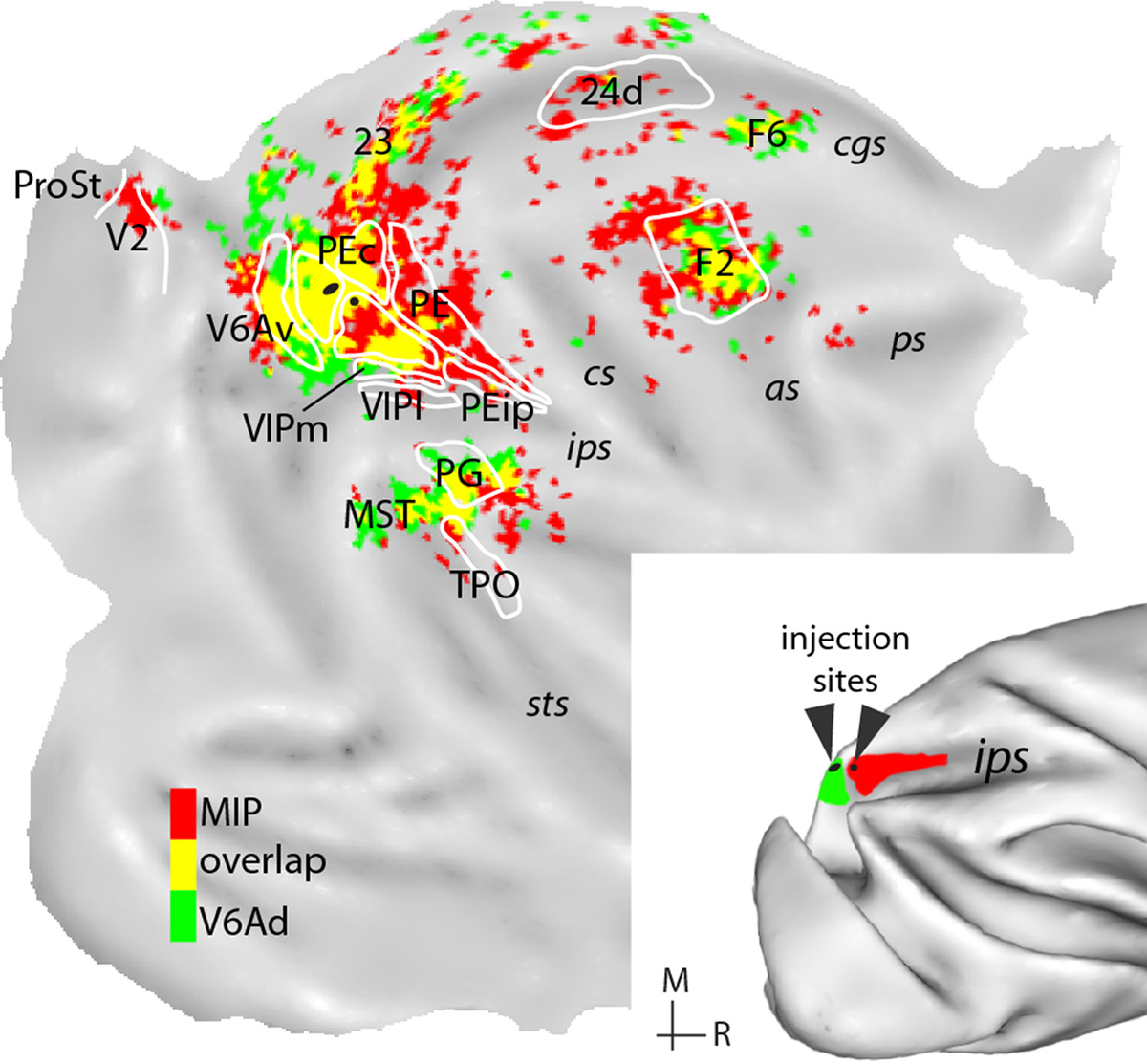 The medial bank of the intraparietal sulcus encompasses a parietal reach region (PRR) where neurons are involved in the planning of visually guided arm movements, which has been the subject of interest in research related to prosthetic arm control. To clarify the anatomic subdivisions of PRR, we examined the connections of different sites within and rostral to this region with other areas of the macaque cortex. Based on differences in the density and modality specificity of connections and histologic characteristics, we propose a subdivision of the medial bank into areas.

This anatomic scheme, which incorporates features of previous proposals but refines the boundaries, may help guide future studies aimed at clarifying the functions of different medial intraparietal areas.

Systematic shortening or lengthening of target objects during saccades modifies saccade amplitudes and perceived size of the objects.
In the present study, we asked whether or not the two are necessarily linked. We tested human participants in symmetrical systematic shortening and lengthening of a vertical bar during a horizontal saccade, aiming to not modify the saccade amplitude.
By this manipulation, we did not induce any change in horizontal or vertical components of saccade amplitude, but we found a significant difference in perceived size after the lengthening experiment compared to after the shortening experiment suggesting mechanisms not depending on saccadic amplitude change. 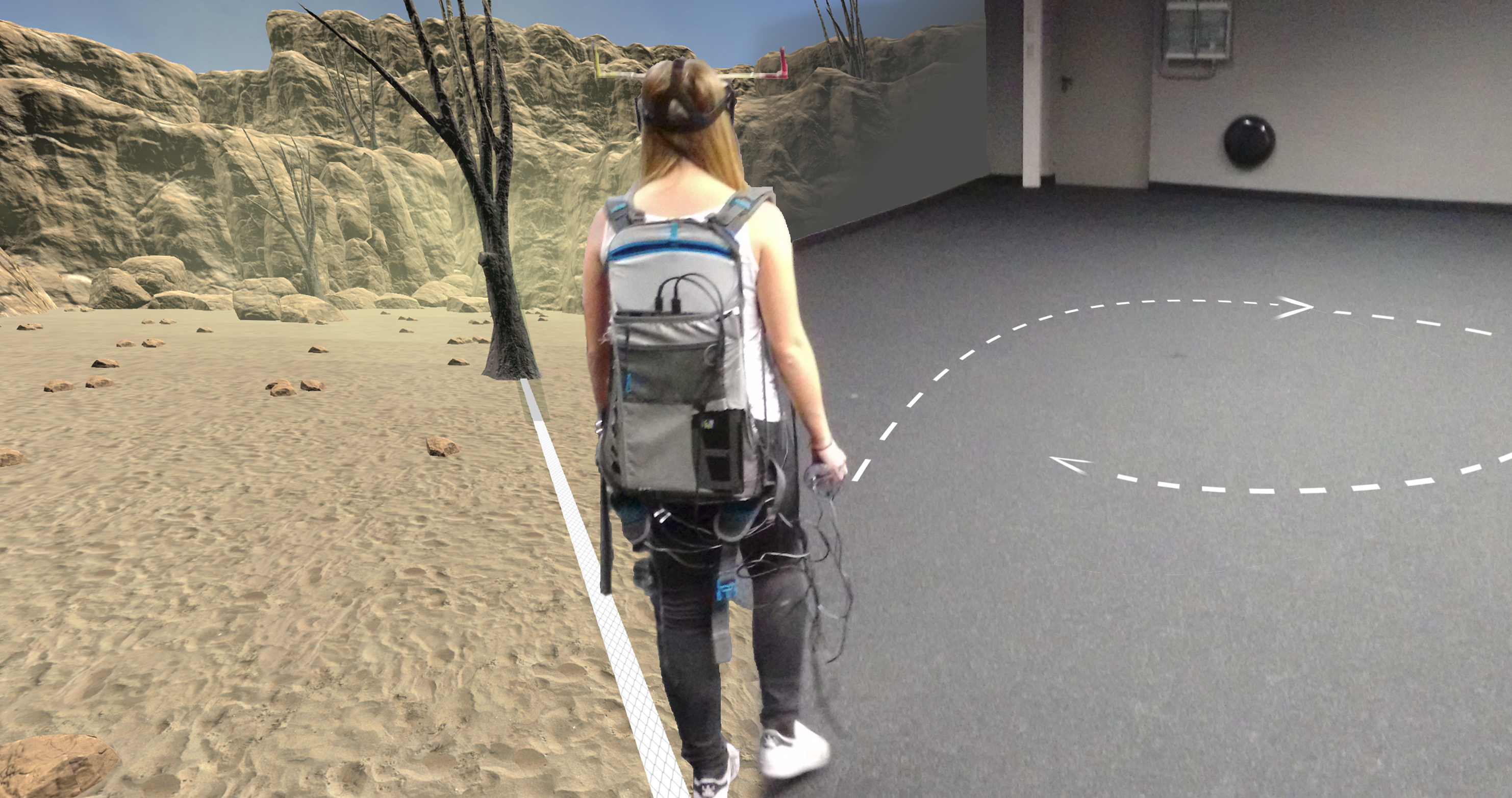 Walking is the most natural way to move in virtual reality, but the limited physical space for movement restricts its applicability. One option is to alter the user’s view of the virtual scene to steer them along a specific path and give them the impression that they are moving in a straight line in a large virtual space. We tested whether prolonged exposure to this manipulation would alter perceptual manipulation thresholds. Therefore, participants first completed a measurement of their perceptual threshold. In a second session, the same participants were exposed to a virtual environment with a substantial curvature gain in which they walked between two targets for approximately 20 minutes. Afterwards, their perceptual thresholds were measured again . The results showed that thresholds increased. 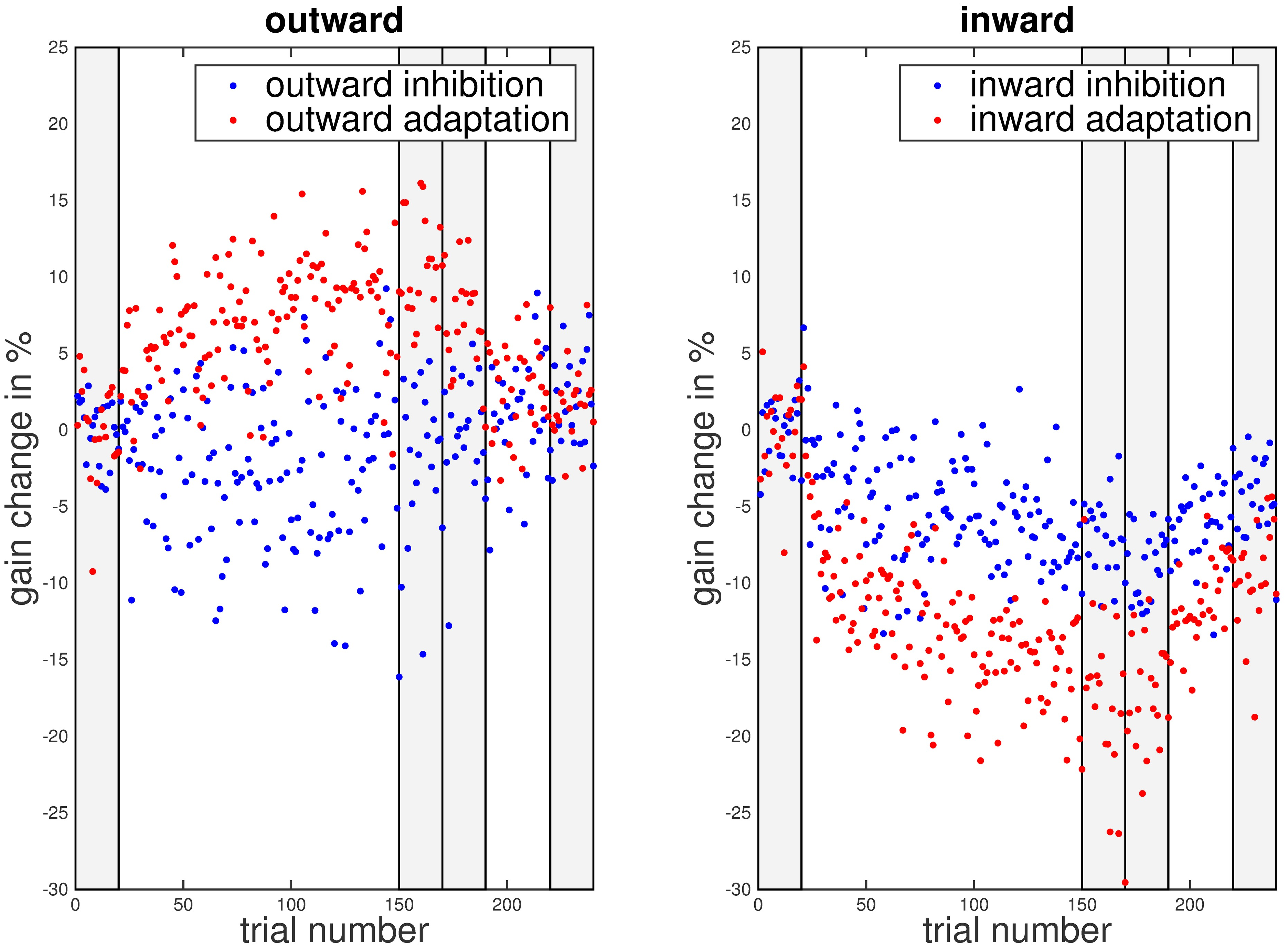 Decoding of reach actions in the Parietal Cortex 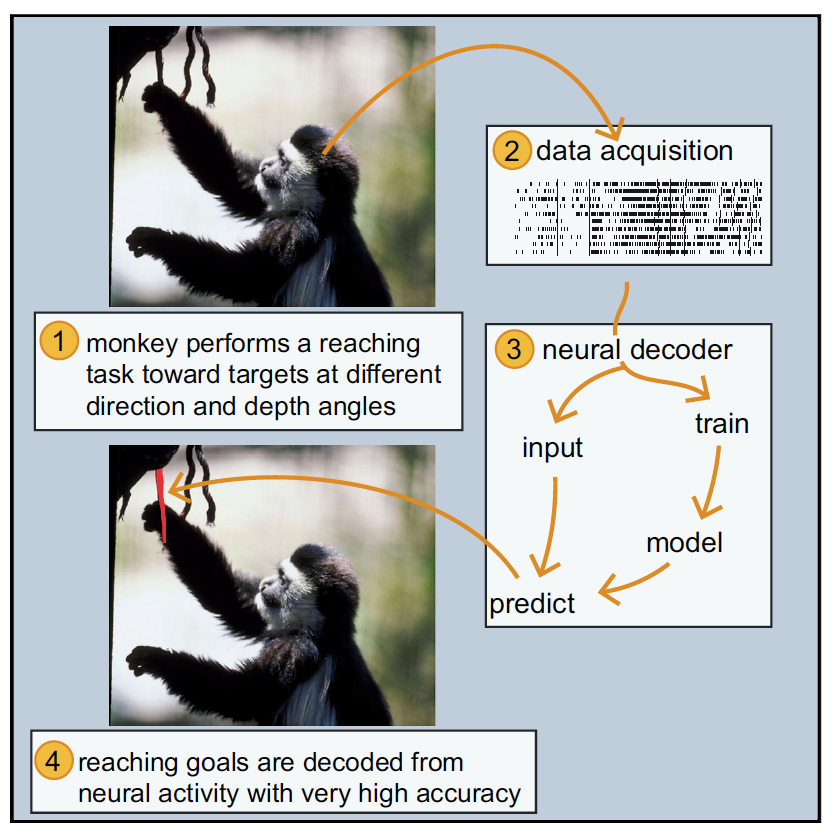 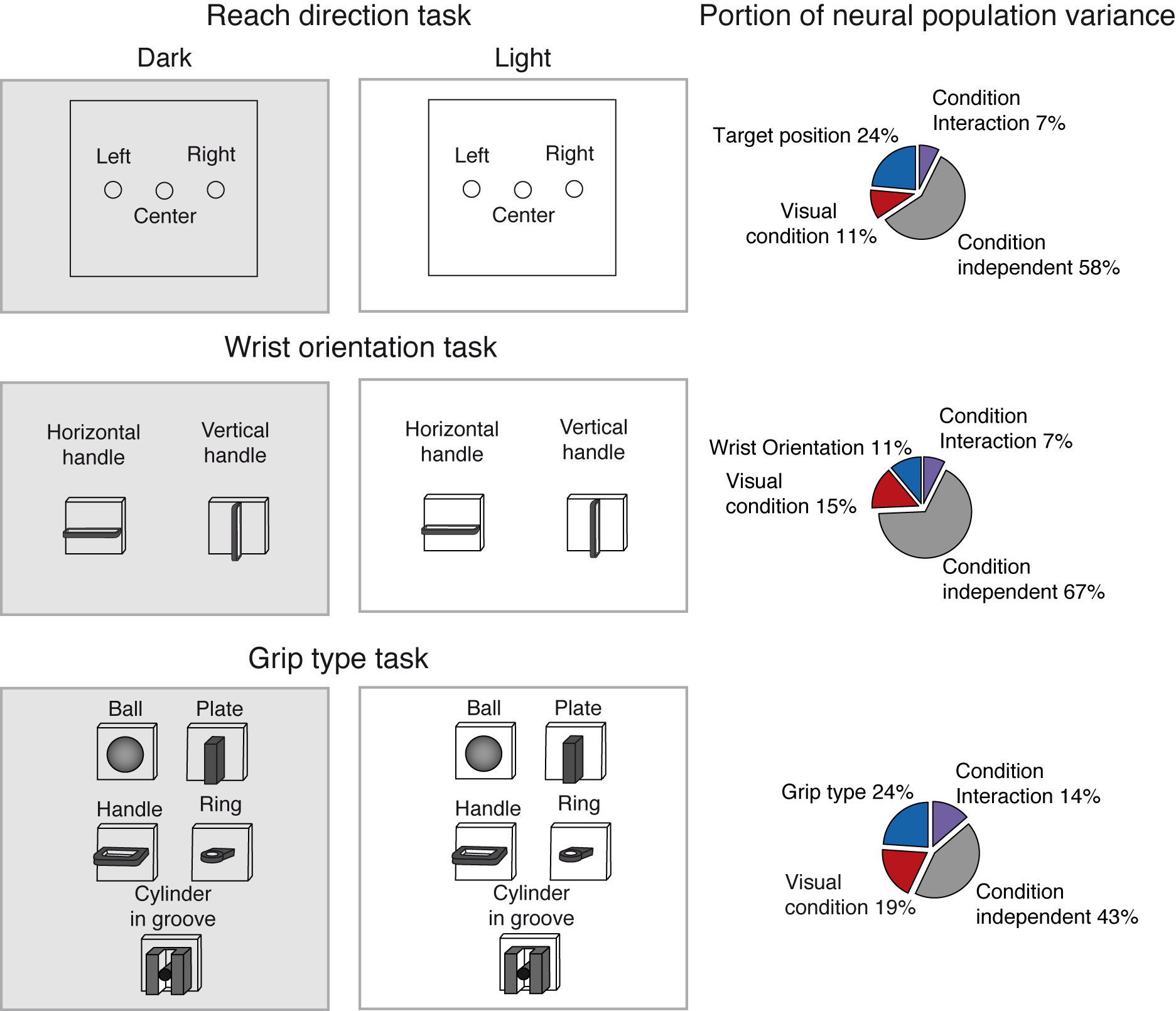 The medial posterior parietal cortex is involved in the encoding of reaching and grasping actions in different visual conditions mainly investigated at single-cell level.
In the present study, we looked for a “low-dimensional” representation of these encoding processes by studying macaque V6A neurons tested in three different tasks with a dimensionality reduction technique, which is very suitable for neuroprosthetics readout.
Comparing the portions of population variance involved in the encoding of visual information, target position, wrist orientation and grip type, we found a different use of this task relevant information according to the type of planned and executed action.

Uniform coding of space in the parietal cortex 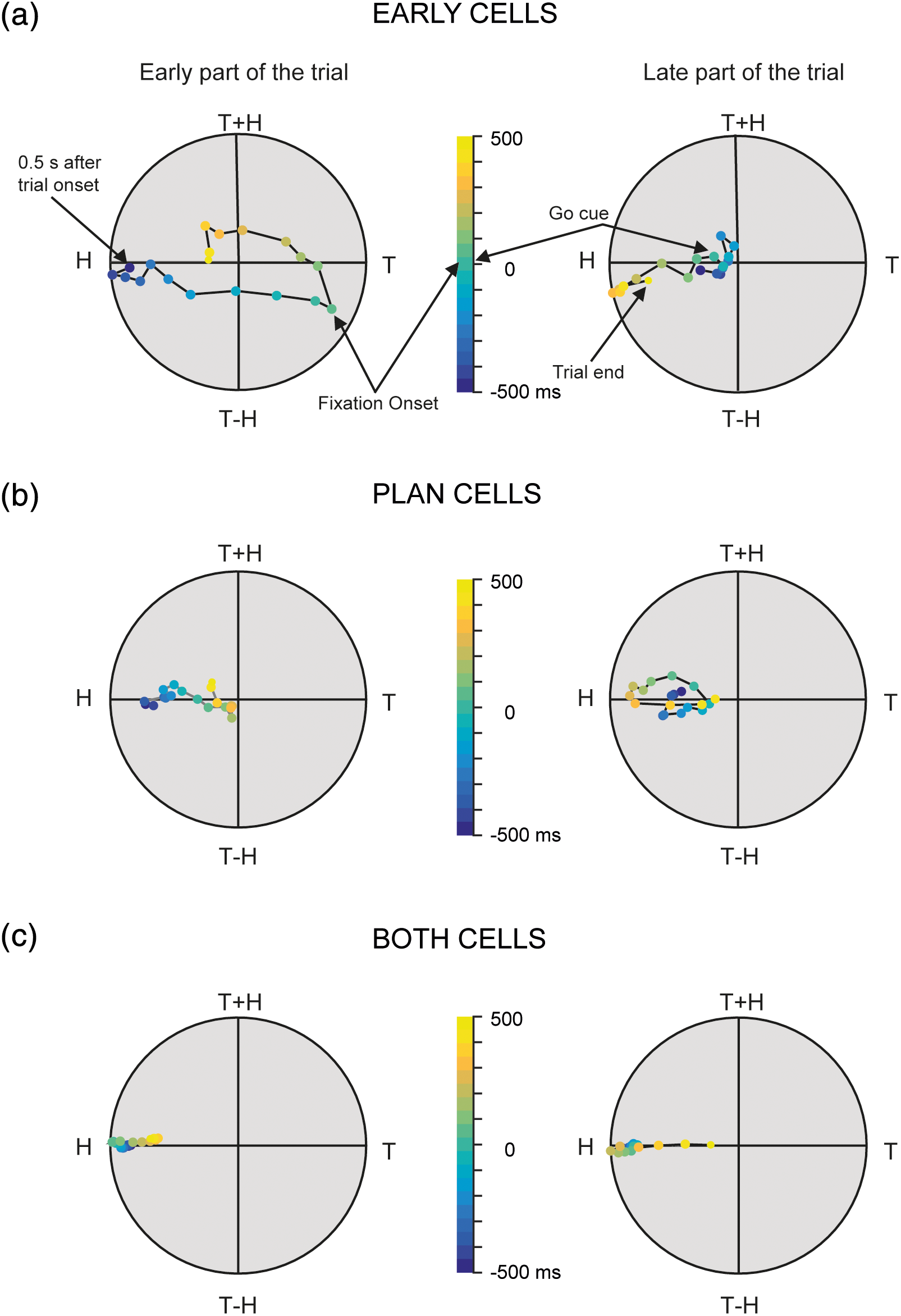 How our brain encodes the spatial location of objects in our environment and uses this information to control goal-directed movements like reaching and grasping?

Despite numerous studies, there is no consensus on the degree of stability in the spatial representations across the rich repertoire of manual actions. Hadjidimitrakis et al. studied the spatial reference frames of single cells in parietal cortex and compared them between two different types of motor response evoked by the same stimulus. Parietal cortex activity showed similar reference frames across the two tasks suggesting a uniform coding of space that enables flexible motor control.

Connectivity of the superior parietal lobule 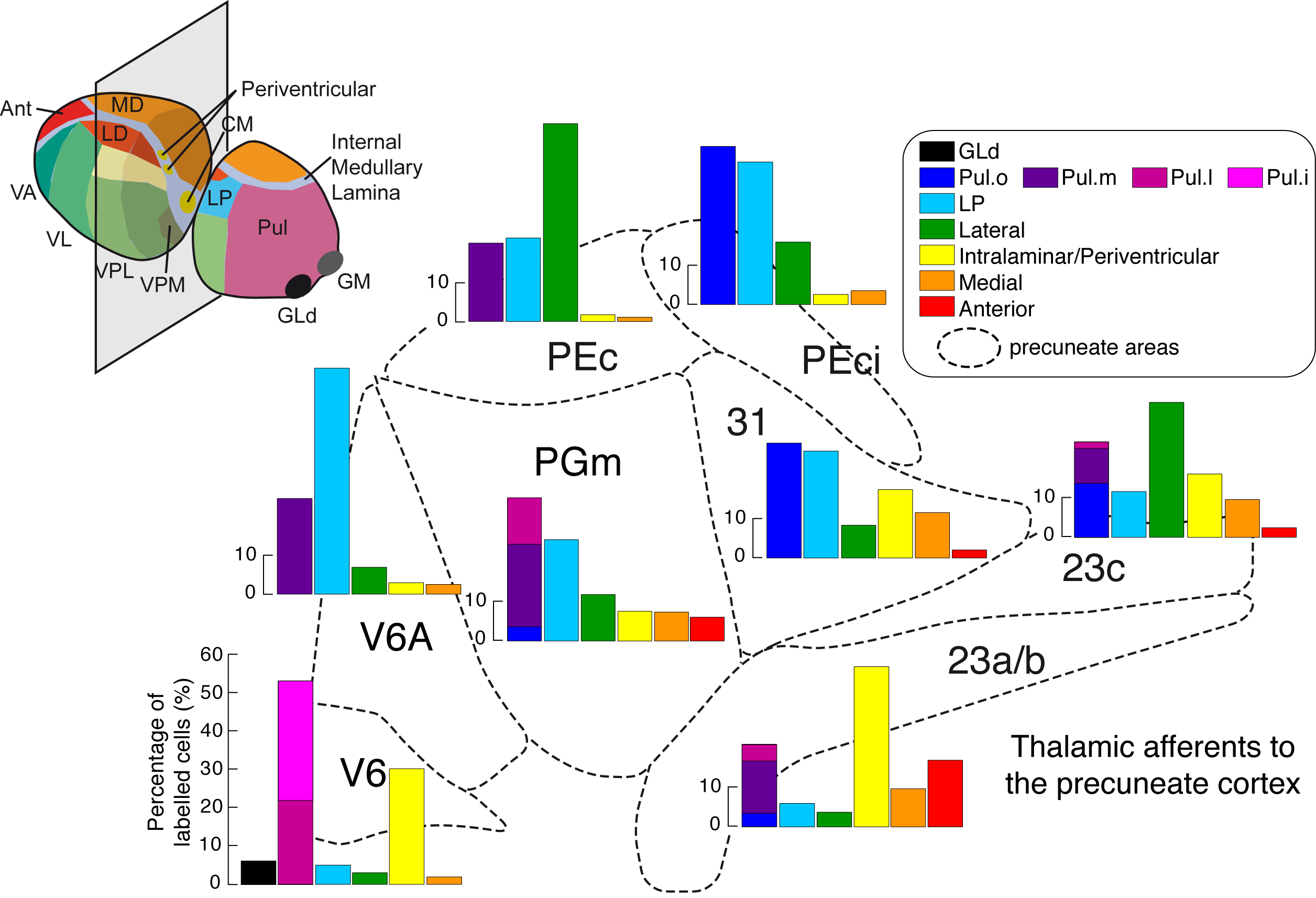 The subcortical inputs from the thalamus are in agreement with cortico-cortical circuits and indeed areas of the SPL receive from lateral posterior and medial pulvinar nuclei that integrates visuo-motor information, motor functions from the ventral lateral nucleus and eye-related activity from medial dorsal nucleus. 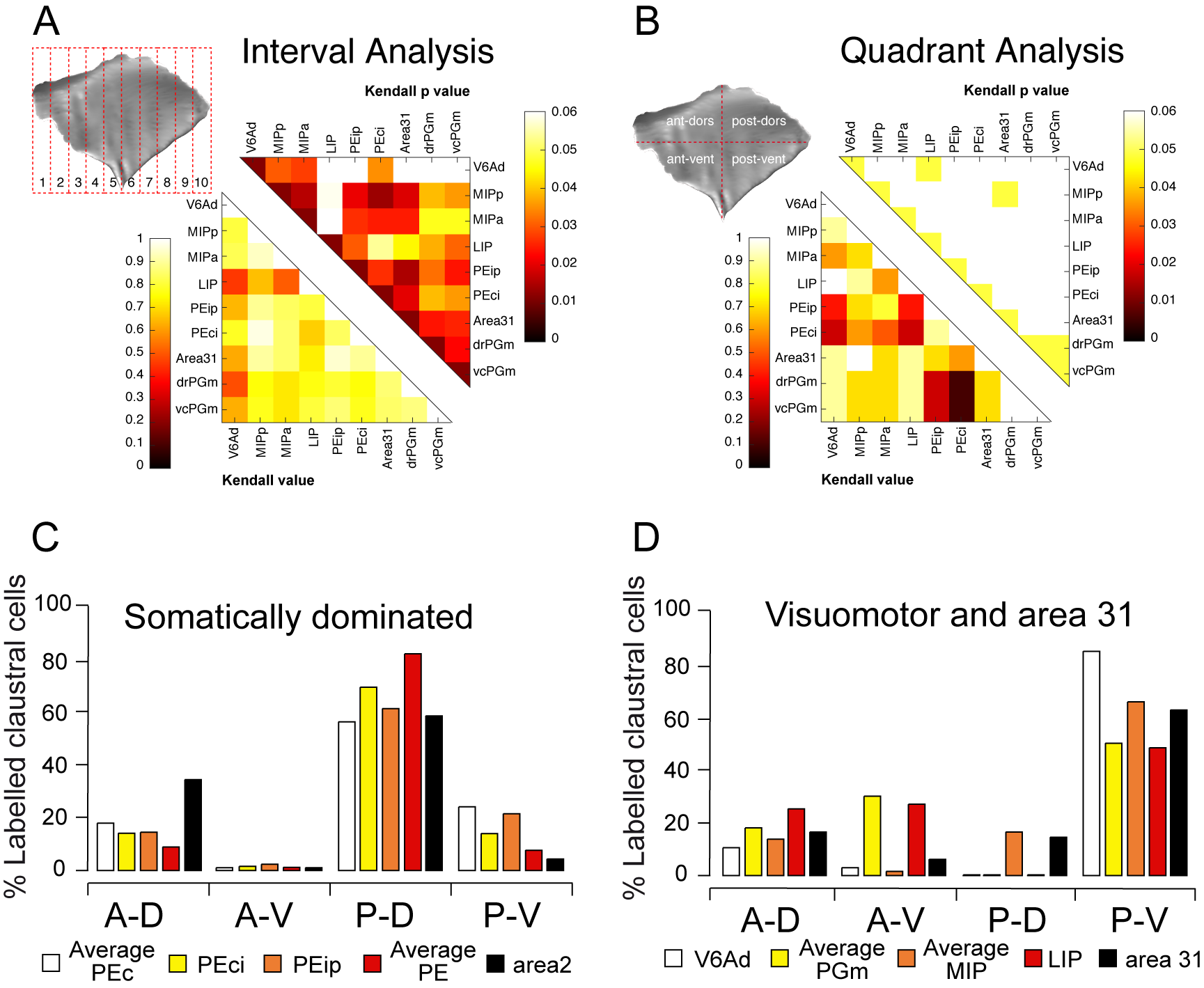 All the areas of SPL are directly connected with the claustrum. The claustral connections well agree with the functional characteristics of SPL areas and, even if a certain level of variability is evident, they receive inputs mainly from the posterior portion of this subcortical structure known to be involved in sensory encoding (visual and somatosensory). 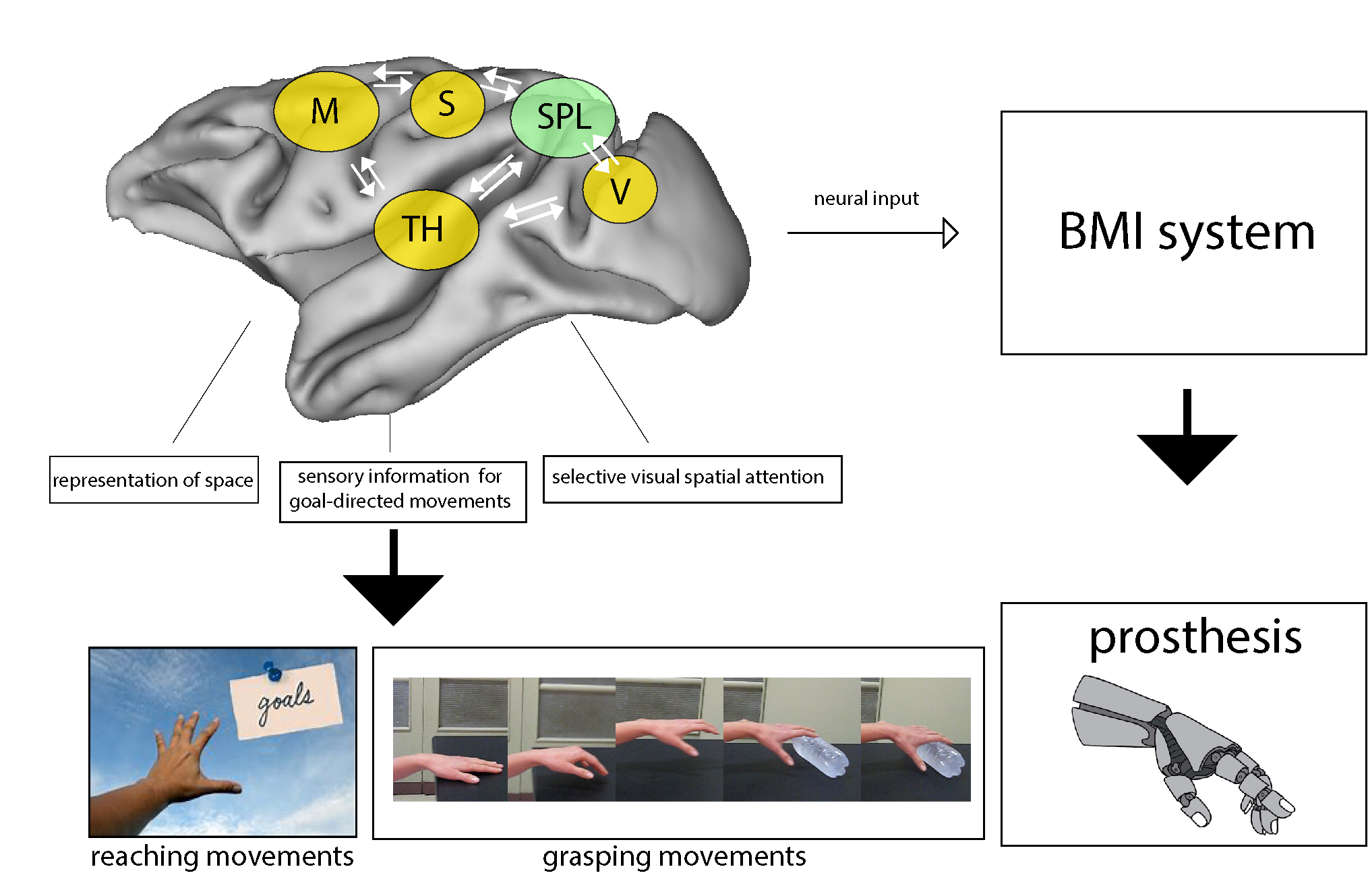 In an fMRI study the neural response to visual aspects of the optic flow generated during locomotion (passive viewing of stimuli simulating linear/curved paths and forward/backward direction of movement) has been investigated in egomotion- (V6+, V3A, IPSmot, CSv, pCi, PIC) and somatomotor-related (hPEc, hPE, S-I) cortical regions of interest (ROIs), likely involved in the visual processing aimed at locomotion control.

ROIs exhibited differential preference for curved paths (for controlling changing direction of movement) and/or forward direction (for a fine visual analysis of the environment needed during locomotion) suggesting that ROIs play a differentiated role in the visual guidance of locomotion.